We focus on long-term results and having major, positive change. Since 1993, our five-year approach has had transformative impact due to strong local leaders, AIR’s dedicated staff in Guatemala, and generous donors and volunteers. Here are the numbers:

Rural families trained In their own communities

All of our projects use the philosophy that direct community involvement in all phases of the projects—from design to implementation—is essential for the sustainability of every project. The fact that AIR Technicians are themselves Guatemalan and share the languages, history, and religious faith of the participating families is also vital. The idea is that after five years of AIR’s training, the groups will have the knowledge and excitement to continue on their own with the regenerative farming methods that have brought them more nutritious food crops and environmental conservation.

Take a look at the map of Guatemalan Departments of Chimaltenango and Sololá. Our latest expansion is to communities in the Department of Quiché.

We use trees that fertilize the soil naturally and are extremely fast-growing.

Our education programs provide a fun way to inform the generation of the future.

Most students have to quit school after the age of 12. We're helping more girls and boys stay in school.

Our fuel efficient and custom made stoves save trees while greatly reducing smoke inhalation.

AIR’s programs protect and restore the air, water, and soil while benefiting wildlife.

Our close long-term relationships enable AIR to respond with critical short-term assistance when a crisis occurs.

Educating community groups about the devastating impact of deforestation for the soil, food security, and water sources is an integral part of AIR’s projects. Guatemala has one of the highest rate of chronic malnutrition in the Western Hemisphere—but AIR is fighting that statistic for the long-term!

Organic farming is part of this sustainability: Too often, farmers are pressured to buy chemical fertilizers because they seem profitable in the short-run—but they are highly destructive for future land use and are often harmful to human health. Instead of buying chemicals to farm, AIR technicians teach farmers how to make a potent organic compost called “Bocashi.” AIR hosted a Japanese volunteer in 1996-97 named Yoshitaka Ota. He received a small grant from the Guatemalan ministry of agriculture (DIGESA) and published a “Guide to Bocashi” in Spanish. AIR technicians then produced a morning radio program in Mayan languages to reach more farmers with the recipe—now Bocashi is in use throughout Guatemala! 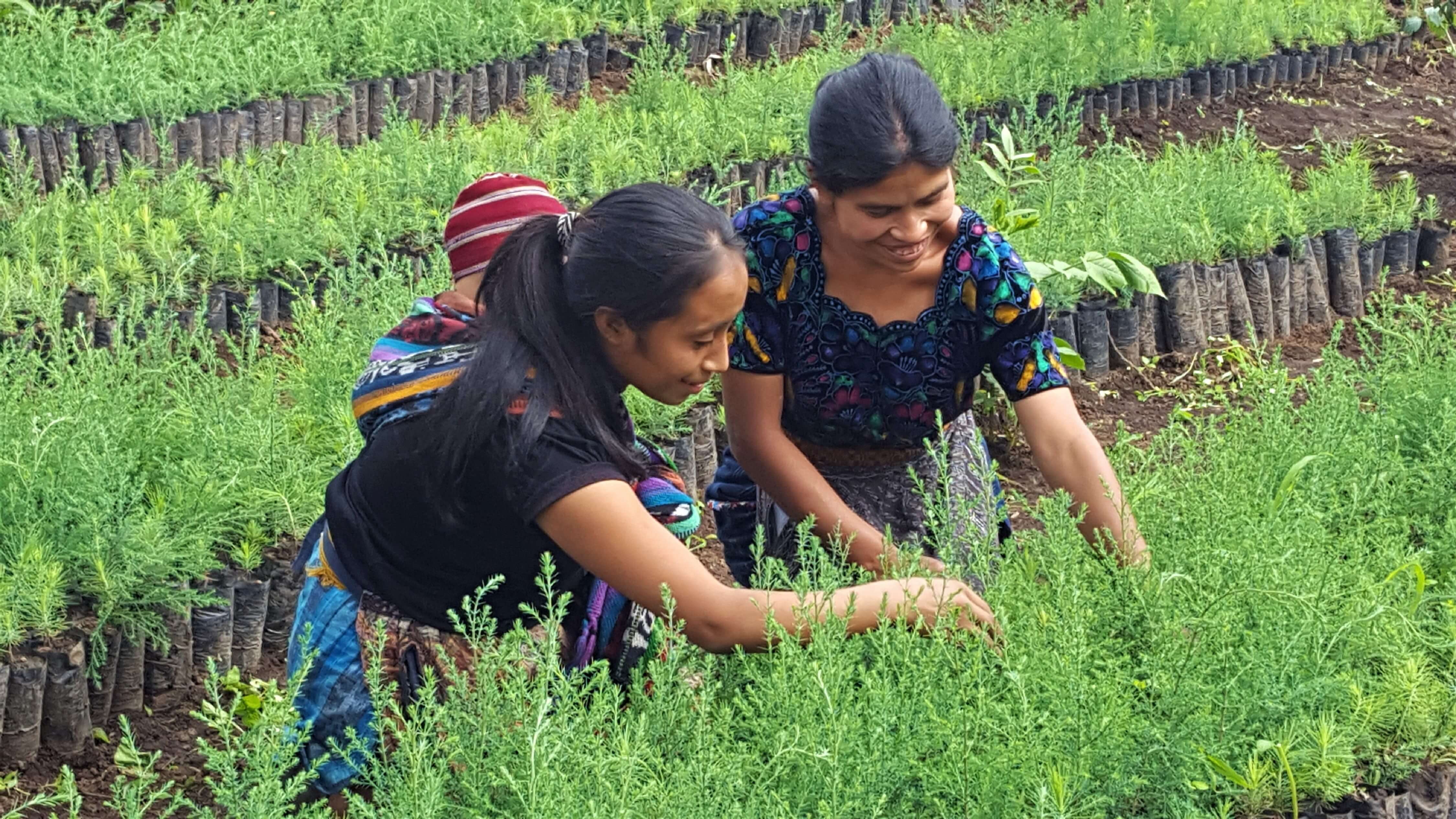 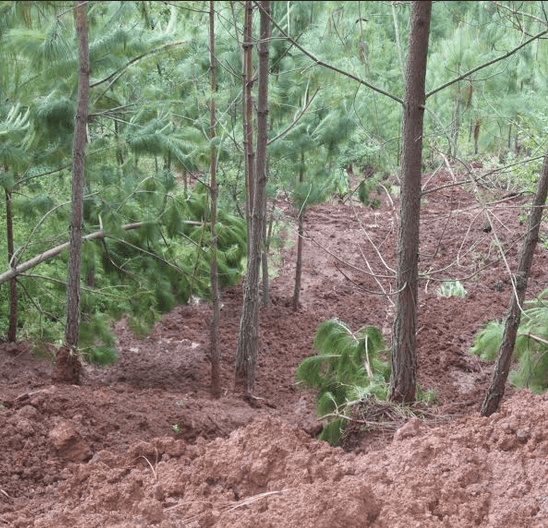 In response, AIR technicians and volunteers have intensified planting of native “pino triste” pine trees that have deep, strong tap roots and grow quickly. AIR has planted millions of these trees on vulnerable mountain slopes. The people tell us that in just a few years these pine trees have prevented mudslides. This amazing 2010 photo shows the power of the AIR pine forest in Simajhuleu that stopped a mudslide in its tracks—before the mud could destroy a stream and house below. As AIR technician Luis Iquique said, “They look like little soldiers standing guard.” 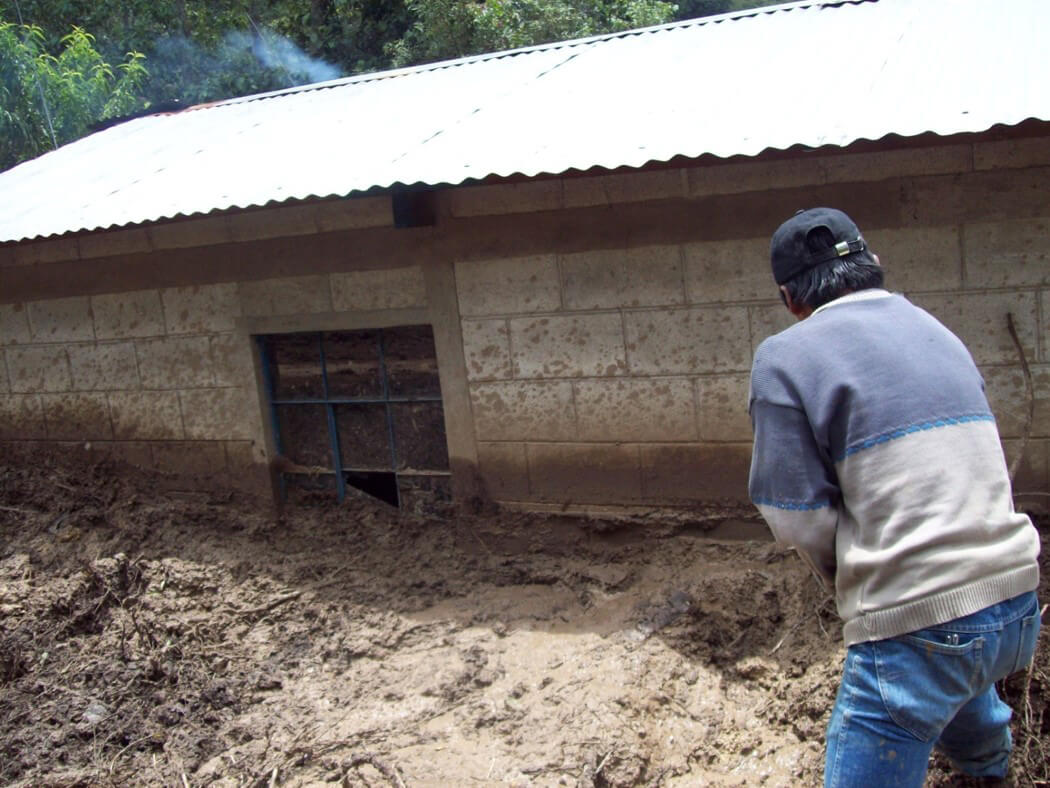 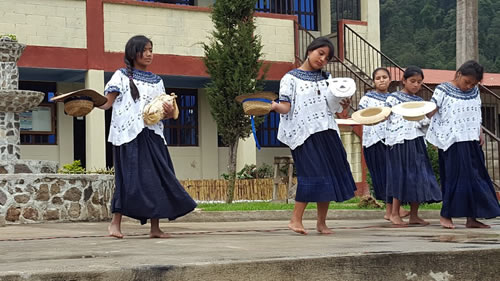 AIR technicians work with rural schools, in addition to their work with farm communities. They will teach students to make “Bocashi,” and will establish a vegetable garden for produce they may take home, as well as establishing a tree nursery on the school campus. The rural school programs are vital for reinforcing the regenerative farming techniques that the neighboring communities are applying.

In addition, AIR produced a curriculum in forestry education for high school students with help from the Ministry of Education and BOPAZ (“Bosques Para La Paz”). This curriculum was updated and printed through a 2016 grant from the ERM Foundation (Environmental Resource Management, Inc.), and is available in Spanish and English, on request to AIR’s email.The AIR technicians and students often organize events showcasing skits, drawings, poetry, and traditional dances about nature. 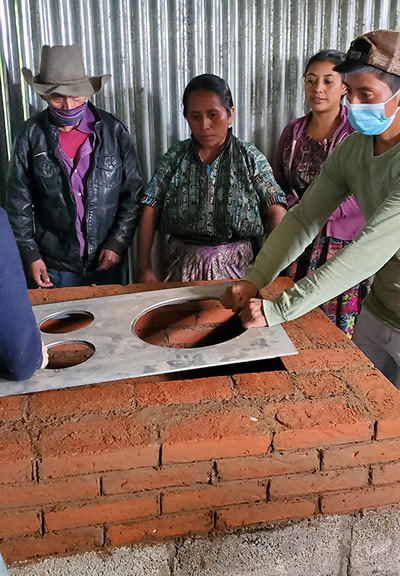 Approximately 80 percent of the Guatemalan population uses wood as fuel for cooking and heating. The traditional open fires constantly emit harmful smoke (photo) and the World Bank estimates that 8 times more people die of lung disease in the developing world from open fires, than die from malaria. The open fires also cause accidental burns to the women and children.

But since 1996, AIR technicians working with family members and summer volunteers, have constructed 880 fuel-efficient brick stoves with chimneys. Not only do these stoves prevent lung disease, but they have conserved about 880 tons of firewood each year because they are so efficiently designed. AIR’s stoves are special because they have the large food preparation area that the women requested, and they are custom built for each woman’s height. We can build even more stoves, with your help! 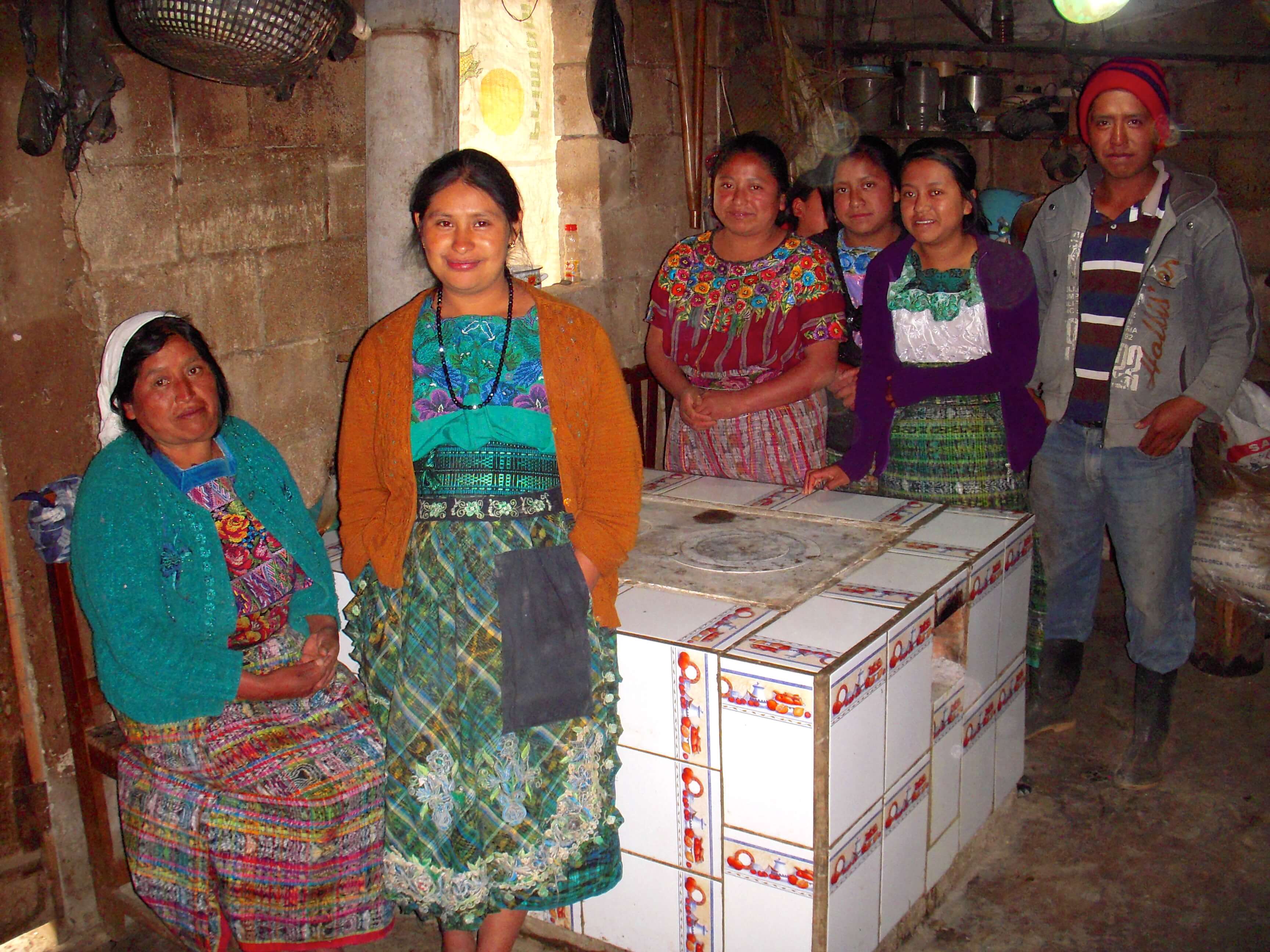 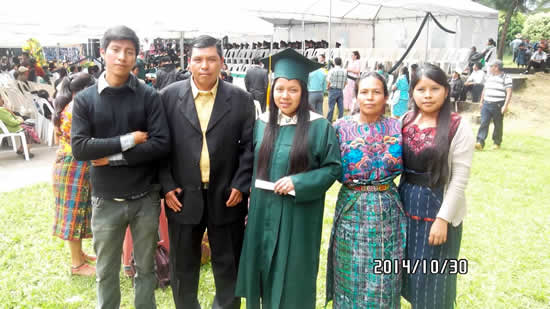 In Guatemala, only a minority of rural teenagers are able to finish high school, because after the age of 12, a small tuition and school supplies are required that most rural families simply cannot afford for all of their children.

In an exciting program, AIR is now providing high school scholarships for boys and girls. The students agree to study hard, and to work in the tree nursery and plant trees around the community and their schools. The students are sponsored by individuals in the US who receive letters and photos from their students. The cost is only approximately $800 a year, which covers the tuition, all school supplies, bus transportation, and mentoring by AIR’s staff. This is a program that directly provides more opportunities and choices for these young adults. 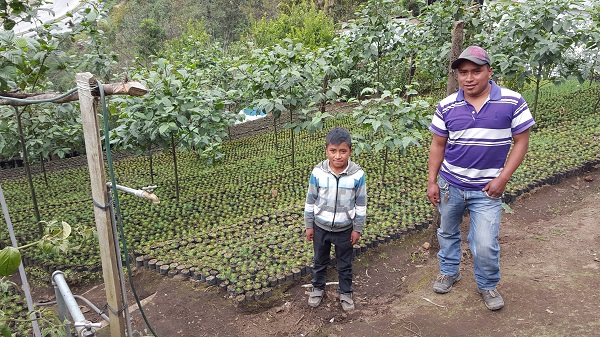 An exciting step often occurs after AIR technicians have finished their training with farmer groups: The AIR tree nursery belongs to the community, and the families decide to use the tree nursery as a source of income! The group members will continue to produce seedlings year after year because they are able to sell the tree seedlings to interested neighbors. The photo here shows one of the most successful AIR microbusinesses where Don Sebastian and his sons now sell 40,000 tree seedlings a year, and have been able to install an irrigation system and send all of their children to school.

It takes time for even fast-growing trees to show their value for farming, so as the trees grow, AIR technicians will teach interested community leaders how to make nature-based products: Aloe vera shampoo, for instance, or menthol cream for colds. Group members are able to use these products, but they are also able to add a little to their family incomes by selling them at market.

The most exciting micro-businesses are when families use the tree nursery itself as a source of income. The group members will continue to produce seedlings year after year because they are able to sell the tree seedlings to interested neighbors. Thus, oftentimes, the AIR tree nursery used during the first years of Farmer Training becomes a micro-business after AIR moves on to other communities—and new farmers buy the little seedlings and learn sustainable farming methods from the original group.

Dozens of AIR nurseries have become community micro-businesses—including the one owned by Don Sebastian’s family in Chucalibal: Don Sebastian happens to have a plot of land near a major intersection which he transformed into a tree nursery business with AIR’s help. Now his extended family raises 40,000 trees at a time, selling virtually all of them for 15 cents each to farmers from three Departments—and they have raised enough funds to put in an irrigation system for food crops and the nursery! 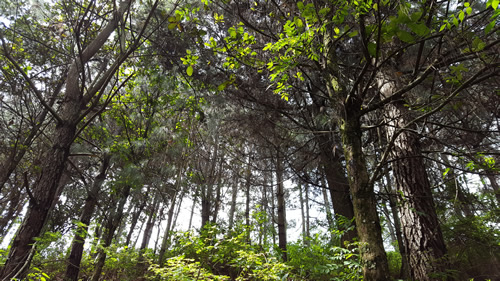 The Earth is experiencing unprecedented changes to its climate – changes that are projected to continue over this century and beyond. Conversion and fragmentation of the natural environment for human uses has led to deterioration in the quality of air, water, and soils – the basic resources on which all of life depends. Central America is a biodiversity “hotspot” – a region with significant biodiversity that is threatened by human activities.

AIR’s programs directly and actively address these problems. Millions of trees have been planted by our technicians, participants, and volunteers – over 700,000 in 2020 alone. They are planted on steep slopes, preventing erosion. They are planted along stream banks, improving downstream water quality. They are planted in impoverished ground, improving the soil. The resulting tree stands and forested patches remove tons of CO2 from the air and improve the habitat mosaic for wildlife. Your support makes this restoration possible! 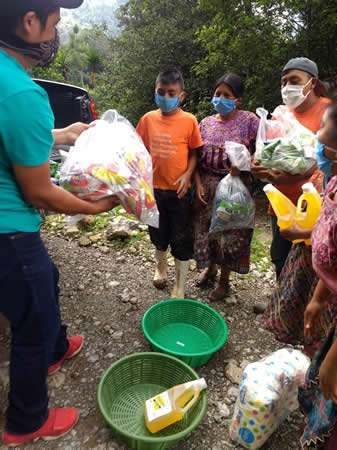 Disasters and emergencies create crisis situations for the people experiencing them, especially for those with limited financial resources. AIR is uniquely positioned to respond to regional emergencies and disasters. Our technicians have long-term close relationships with the communities where we work, allowing us to help swiftly and precisely with critical short-term aid to meet the specific needs of each situation. During the 2018 Volcán de Fuego eruption this meant providing emergency food aid to affected farmers that lost crops, but it also meant buying new boots for fire department crews whose footwear was melting from the heat as they responded to the disaster. In the spring of 2020 this meant delivering weekly food kits to families during a COVID-19 lockdown that closed local markets in the communities we serve. With your help AIR will be ready the next time the unexpected occurs.